Sound Objects Poetry and Beyond 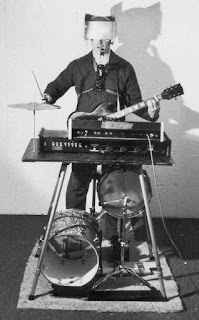 ERIC THIELEMANS will be an artist in residence from February 3 to 8 and he will be presenting a new work for the night! He a researcher in the Arts at both the Royal Academy of Fine Arts, and the Royal Conservatoire in Antwerp until the end of 2020.As a genre crossing/blending percussionist with a classically trained ear, Eric Thielemans has worked his way via jazz drumming and free improvisation towards his own realms in Music & Performance.Douglas Park is U.K and Belgium based, internationally active and exposed artist, author, critic and curator. Literary prose and written art, as well as literary prose and written art serving as criticism, also relatively conventional essays. Solo work, collaboration and project input.Sean Derrick Cooper Marquardt is a Berlin-based American performance artist, musician, free improviser, composer of experimental music and independent film producer. He is also the musical theater writer/composer of the experimental movie “Drone Drama (Music For The Dead)”, now currently being filmed by California-based visual artist Cecelia Chapman. He is also the artistic director and curator of the music labels: Hortus Conclusus Records, Friends of Sagittarius Records, Friends of Sagittarius Festival and Magic Mitte Cinema. 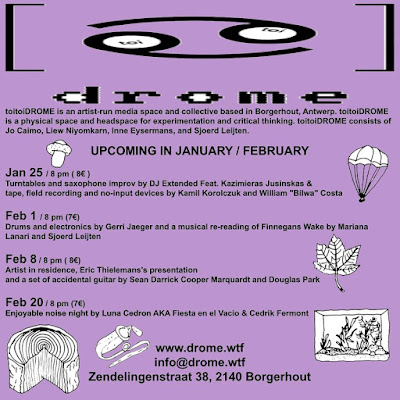