The Man Who Painting Water Drops 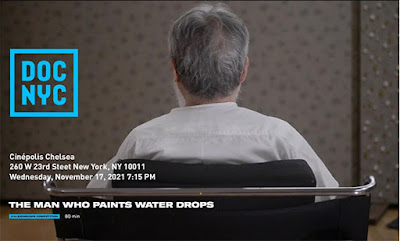 'The man who paints water drops' a film about @kim.tschangyeul will be screening

The U.S. premiere of The Man Who Paints Water Drops, a documentary film about the late Kim Tschang-Yeul (1929-2021), directed by the artist’s son Oan Kim and filmmaker Brigitte Bouillot.

The screening will take place on Wednesday, November 17, at Cinépolis Chelsea, 260 West 23rd Street. The event is part of this year’s Doc NYC, the largest documentary film festival in the U.S.

The documentary won the Silver Horn Award at the Krakow Film Festival in Poland this June.

Born in North Korea, Kim Tschang-Yeul (1929-2021) is an internationally acclaimed Korean painter who underwent the turmoil of postcolonial liberation and the Korean War. During his time in South Korea, he studied painting at Seoul National University’s College of Fine Arts and co-founded Korea’s Modern Artists’ Association (“Actuel”) in 1958. Kim Tschang-Yeul left for New York in 1965 and studied at The Art Students League of New York. His earliest experimentation on visceral abstraction and experience of deep isolation in New York profoundly influenced his style. In 1969, Kim Tschang-Yeul finally moved to Paris, where he discovered his signature style: the drop of water. 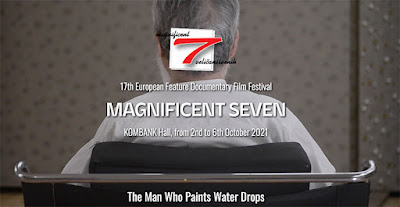 ”My headline is ordinary people”. Director Marc Isaacs is behind the camera skype-talking with his producer, who gives him the information that the broadcasters of today only want to give money for more commercial/sensational stories. Not ordinary people stories.

For me being involved in the extraordinary festival Magnificent7 I have always been drawn by extraordinary films about ordinary people. ”The Filmmaker’s House” by Isaacs is a film like that, including warmth and love and respect for its characters. Ahh, I don’t like the word ”characters”… better is human beings caught by the camera in a film that is intelligent, playful, fun to watch, lovely human beings, who are who they are – on the stage of the Real and Extraordinary Life.

Absolutely the same you can say about “Merry Christmas, Yiwu” by Mladen Kovačević: Intelligent, playful, respectful… I don’t recall to get so close to Chinese people in a film made by a film team that is not Chinese. Festival directors Svetlana and Zoran Popovic asked me if in my opinion this Serbian documentary was good enough for the festival. It’s a masterpiece, was my answer, we must have it. Later on I had the pleasure to be on the jury of the Sarajevo Film Festival, where there was no doubt, when the main award was to be given. The magnificent cinematography and narrative rythm demands the great screen and a full cinema in Belgrade!

The Popovic couple did not push for the Serbian film from China and I – as a Dane – did not for „President” by Danish Camilla Nielsson but I hoped they would like the sequel to „Democrats” that already was at Magnificent7. Oh my God, they did and I was happy as I consider Nielsson as one of the (if not the) best documentary directors in Denmark right now. Even if the film has the focus on a country and its politics, again Nielsson lives up to what she said to me in an interview long time ago: ”You’ve got to have love for your characters and do everything you can to give them confidence in the job you’ve been assigned”.

Also „Holy Father” by Andrei Dăscălescu was awarded at the Sarajevo Film Festival for its intimacy, for crossing the border between what is private to personal in the narrative approach making it an extraordinary film about an ordinary theme, father and son. Dăscălescu risks, his father risks, the monk from Mount Athos; the film becomes philosophical and existential and there are many points of identification in this so well constructed, emotionally balanced story. Lovely that it can be shown on a big screen even if the main sponsor is HBO, the broadcaster. No blocking.

Family is indeed also the theme of the French “The Man Who Paints Water Drops”. Kim Tschang-Yeul is the name of the artist, Korean, director is Oan Kim, his son, who wants to know (more about) his father, who does not talk a lot; no need for that as the audience is given superb access to a fascinating world artist and the word charisma seems to be an understatement to be in company with Kim!

Children and old people. Very very often they constitute the best gallery for extraordinary films about ordinary human beings. In the selection this year for the festival we chose two films, one from the beginning of life and one from, when the end is near. Finnish film ”School of Hope” by Mohamed El Aboudi takes the viewer to the desert of Morocco, where children go to school to learn, simply. The teacher is fantastic, the children are individuals who have to support their parents and find ways to avoid classical gender roles imposed by the older generation. Full of magical moments.

Heddy Honigmann, a true master of documentary concludes this intro. Her film “100UP, also full of unforgettable moments, that advocate for – as one of the centenarians put it – life as a miracle, said by ordinary people who have lived long enough to know!

Hope that you also will enjoy to GO TO THE CINEMA to see fascinating lives unfold on the screen – visual beauty.

PS: A special screening of the festival, film number 8, is “Taming the Garden” by Salomé Jashi from Georgia. It started its screening career at the Sundance Festival in the beginning of 2021 and has since then been praised in festival after festival. I was lucky to watch rough cuts of the film in 2020 as a true admirer of Salomé’s previous work and I was looking forward to recommend it to Svetlana and Zoran Popovic as the film is a true Magnificent7 film from all angles. They agreed with huge enthusiasm. I told this to the director. First and foremost it is a magnificent authored documentary with many layers giving me associations to Hans Christian Andersen and his “The Nightingale” watching trees in the park being watered and held with wires. Read elsewhere in this catalogue why the festival directors chose to have a number 8 with a special focus.

The man who paints water drops

A superb documentary work that ranks in style with the films of some of the most important French authors.

This is a story that introduces us to the dark inner spaces of a man crucified between Korea and France, to the spaces of a personal history inextricably intertwined with the history of a nation, to the spaces of colours, paintings and painting, to the immeasurable space between the painter and the fluid surface of the canvas, to the microcosm of innumerable droplets. This is an exciting personal search and a refined essay on art and the artist. Together with Brigitte Bouillot, Oan Kim tells the story of his father, one of the most important contemporary artists in South Korea. This is the story about the dilemmas and secrets that the son faces when trying to make a study of the father, a study in which close up shots of his always unusually pensive father are intertwined with the shots of his work. This precisely captured meditative peace is filled with additional flow of oneiric fragments of drama and unrest. Authors create together the film as a perfectly constructed puzzle where the last, smallest piece will give the final meaning to the whole story. In a musically precise rhythm, in a slow pace, the authors build a real cinematic tension that keeps the viewers nailed from the beginning to the end of the film.

This is a film about a secret hidden in depths of a torn being who turned into a charismatic artist so that he could testify to the world about the beauty that rises above the dark abyss.