Interview With a Nuclear Contract Worker

1999
Hi-8 to DigiBeta, 9min.
Interview with a Nuclear Contract Worker acts as a host and paratext to Glow Boys.
This is an interview with an extra from the set of Glow Boys. He weaves a darkly humourus narration between his experience on the film set, shifting between his work in the reactor and his analysis of what he terms "the nuclear racket". Constantly in a state of flux, his conversation shifts from the film time, to the moment of being filmed, to his personal time away from the set. He is a temporal nomad, unconstrained by the controls of temporal designation.
For more information on the subject visit : http://www.metafilter.com/102084/glow-boys-nuclear-janitors-dying-for-a-living 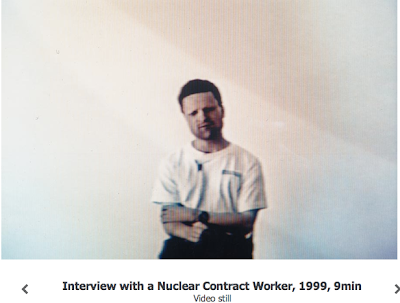 Cast:Douglas Park
http://www.markaerialwaller.com/nuclearworker.html
Mark Aerial Waller makes films, events and sculptural installations that seek relationships with the historical positioning of culture; that mythologically potent archival data can coexist in the area between the reconfigured present and its original home. This work includes the film Glow Boys (1999), made in part at Oldbury and Sizewell reactors, after a year's research meeting staff and contractors at BNFL sites across the UK, Midwatch (2001), where interviews with veterans of the first British nuclear weapons tests collide with  Melville's Moby Dick in a psychologically charged exchange. Waller lectures at Central Saint Martins and Norwich University of the Arts and exhibits internationally.